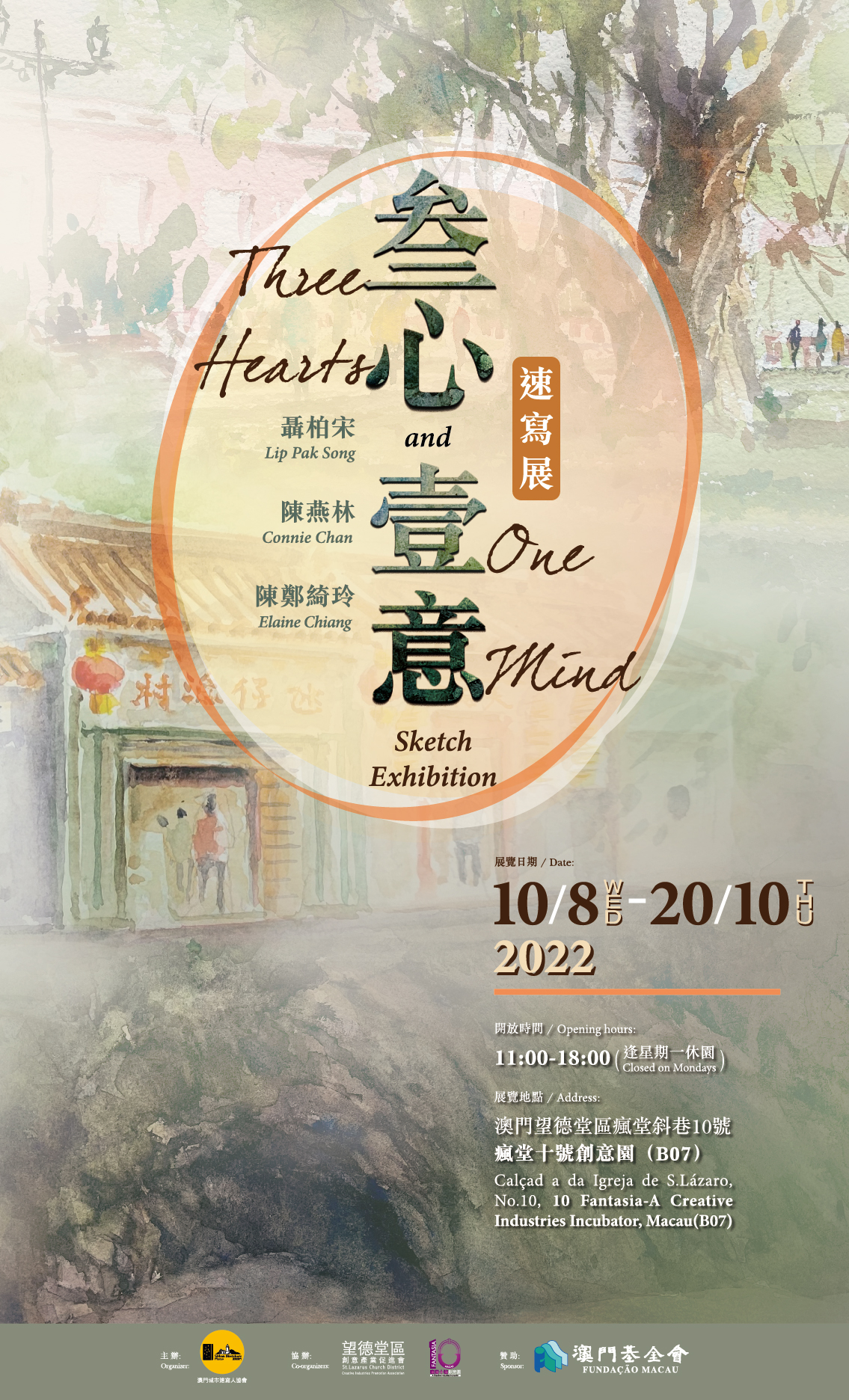 Concept of the exhibition: In this exhibition, the three “Sketching Macao” painters hope to share their experience of painting lesson:

．to learn from the process rather than the result,

．to overcome the trap of failure and self-criticism,

．to continue to study hard,

．to feel the joy of creating themselves by wandering through life.

Lip Pak Song is a native of Xinhui, Guangdong Province and settled in Macau in 1962. In 1986, he was being sent to Singapore by his company, Mandarin Oriental, to participate in an international ice carving competition and won a bronze medal. Soon he joined “Portas do Sol” and continued to work on ice sculptures, butter sculpture, and various vegetable and fruit carving. After retiring in 2014, he enrolled in the “Seniors Academy, Macao Polytechnic University” to rejoice the fun from painting. In 2018, he joined “Urban Sketchers Macao” and thanked to teachers and friends for their selfless guidance over the years. With the support of “Urban Sketchers Macao”, he and his friends are now boldly organizing a three-man exhibition to fulfill to his elderly life fearlessly.

Chan Yin Lam, whose real name is Yin Chu, was born in overseas Chinese, Vietnam, in the early 1970s.She studied with the famous watercolor painter Mr. Kam Cheong Ling for more than three years, and then stopped painting for more than 40 years. After her retirement, she remembered her mentor’s teachings and was encouraged by her fellow mentor to return to painting as a hobby after retirement.

In mid-2016, she met Mr. Lee Kong Hon during her painting study. Due to her interest in painting, she was subsequently recommended to join “Urban Sketchers Macao”. She became a member of the “Macau Artist Society” in the following year, and since then, she has enjoyed learning from her fellow painters. She was honored to hold a three-man exhibition with two of her friends under the guidance of “Urban Sketchers Macao” to share the results of her recent sketching work. She would like to express her heartfelt thanks to “Urban Sketchers Macao” and all the teachers and friends.

Chan Chiang I Leng , born in Macau, she had worked in clerical and administrative work for more than 20 years. She was a person with great interest in Reading and Aesthetics. She has been studying painting since mid-2018 and met Ms. Chan Yin Lam during the watercolor course, which recommended her to join “Urban Sketchers Macao” in 2019. With the encouragement of fellow painters, she started painting on the street, and was humble enough to learn from her own shortcomings. She was very grateful for the support of “Urban Sketchers Macao”, and she got valuable experience and memories to be with the two seniors in this three-man exhibition.